The Jungle Navigation Co. Skipper’s Canteen is the newest restaurant at Magic Kingdom. For a bit they were only taking same day reservations, but they have been since been added to the 180 day ahead reservation list.

If you feel at home on the Jungle Cruise then this place for you. Alberta Falls (granddaughter of Dr. Albert Falls, the founder of the Navigation Company) has opened this restaurant to serve those vacationers before or after their Jungle Cruise. Passengers are seated in one of 3 rooms, the Crew’s Mess Hall, the Falls Family Parlor or my favorite, the Secret Meeting Room of the S.E.A (Society of Adventurers and Explorers). Each room has secrets to share. The beauty is in the details here, be sure to read the message boards in the mess hall and the books in the secret passageway to the Secret Meeting Room.

The servers here are Jungle Navigators, so be ready for bad puns or eye rolling jokes. Ask all the questions that pop in your head, they are pretty much guaranteed to have a cheesy answer.

We arrived a few minutes early for our reservation, drenched from a storm. When I checked in I asked if we could be seated in the S.E.A room and was told it would be possible if we would wait a few extra minutes. I was eager to dry off and look around the place a bit so we waited. We were soon brought to our table, our server reminded us that our seats were flotation devices.

I had read a few reviews and checked out the menu before we got there, but it changed a bit before we arrived.

We started with some hot tea (we were soaked from the storm) and a Punchline Punch served in a tin mug.

The photos I’d seen previously were served in a Moscow Mule mug, but this was more of a mess kit mug, very thin. I use it at home for snacks of cereal and ice cream. I wouldn’t use it for anything hot or you’ll burn yourself. The Punchline Punch is a blend of mango puree and tropical juices. It is super sweet and yummy. The other option is Schwietzer Slush, which is apple flavored slush with apple boba and sounded too sweet. Both can be served without the souvenir mug as well. 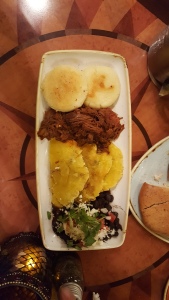 Moving on to the appetizer we ordered the arepas. Which were delicious and have now been replaced on the menu with more of a layered version of almost the same thing. They got rid of the tostones and topped the rest with some avocado cream. Based on the menu it looks like our version was the deconstructed one and the new one sounds fantastic.  The menu appears to have changed at least 3 times since they opened. So if you don’t like it, try it again-they are constantly reworking things. And if you do like Skipper’s Canteen try it again anyway-you never know what new thing you’ll like even more!

On to the main event, the entrees.  My partner in all things Disney food decided on the “Tastes like Chicken”-because it is! Hers was described as crispy fried chicken with ginger and citrus scented rice, chili glaze and seasonal vegetables. 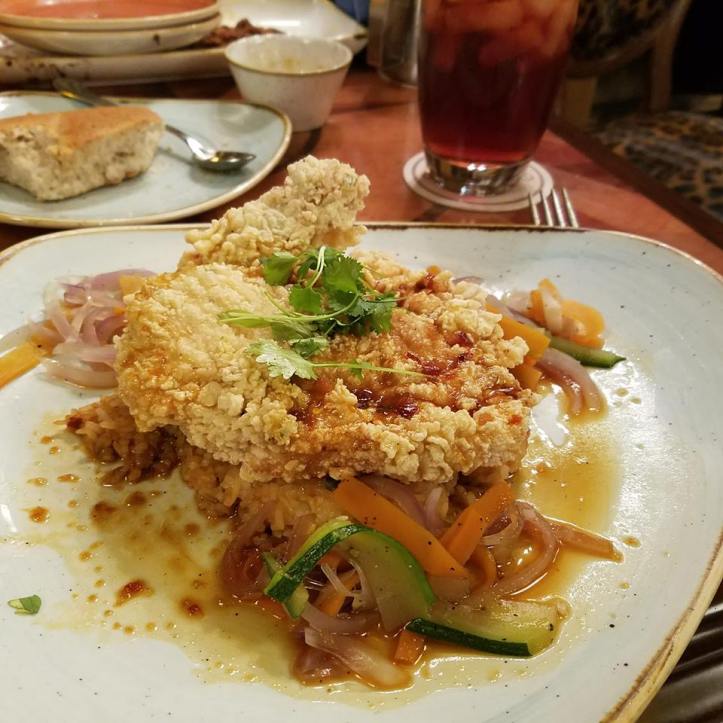 She described it as the best thing we’d eaten all weekend, besides the Friar Tuck’s Mac and Cheese . The citrus glaze was delicious, especially on the vegetables. The chicken was crispy-for awhile anyway. As friends do, we shared our meals. When I tried hers it was mostly breading and pretty soggy. But I think at first bite it was probably great.

I ordered the whole fried fish. Mine was served with ginger rice, scallions and soy ginger vinaigrette.

Our server advised me it was a lion fish. They have a problem with overpopulation of them where they don’t belong. So chefs found a way to make use of them here. They way they are cooked makes it easy to pull the meat off the bone, it was easier than the time I had one here in New Orleans at a world-famous restaurant that is known for their whole fried fish. The rice and vinaigrette sauce complimented each other,the ginger added just the kick the rice needed.

For dessert we went with the “Quick Sand!” a jasmine rice pudding, mango sauce, lemon curd, hibiscus meringue, and pineapple. 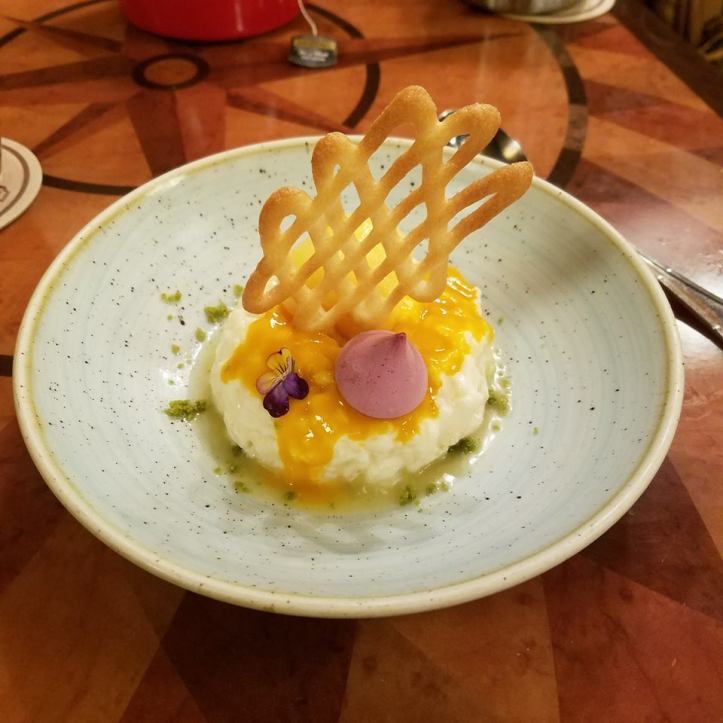 I am a fan of rice pudding, this one was wonderful. Creamier then your average pudding and the lemon and mango flavors combined beautifully.

I highly recommend the Skipper’s Canteen. It’s unique, the decor is phenomenal and there are lots of easter eggs through out the place. Check out the date on the banners, they coincide with the opening of Magic Kingdom. Look closely at book bindings, postcards and messages-you’ll find all sorts of hilarity. 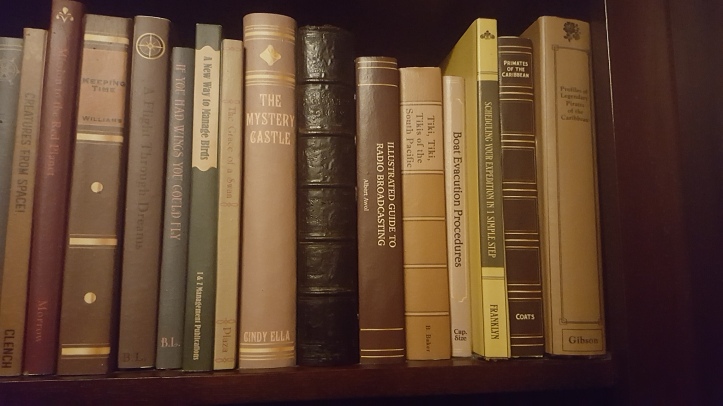