One summer morning when I was around 8 years old, my aunt woke up my cousins and I and tossed us in the car. We were going to Disney World she said (we lived about 90 miles away). It was a surreal day. Usually Disney meant weeks of anticipation and planning. Before we’d even registered where we were going we were walking through those welcoming gates. The first stop for my aunt was always Cinderella’s castle, where she would make a lunch reservation (at what was called King Stefan’s Banquet Hall). This was her tradition, a bit of quiet time to relax away from the hustle and bustle of the park.

Gone are those days, sure it’s still a bit more quiet and reserved then eating at Tommorrowland Terrace, but unless you are online at the exact moment six months before your trip starts you may have a hard time getting a reservation. Which is what my poor aunt discovered when she tried after entering the park a couple years ago.

But the good news is it’s just as magical as it was so many years ago, it’s just a bit more streamlined now. When you make your reservation you pre pay. Keep in mind it’s charged as 2 Table Service Meals on the Dining Plan. I had no dining plan this trip but I did have an Annual Pass. It’s listed as giving a 10% discount to passholders. I called the reservation line to ask how the discount would be applied. The Castmember said there was no discount and stated her supervisor confirmed this. However, I had my passholder info and it said otherwise. At Guest Services in Disney Springs they confirmed what I had read. You can give your pass and id to your server and they will refund the discount amount. They also precharge you gratuity at 18%.

When you arrive  at Cinderella’s Royal Table you go through the line for a photo with Cinderella. Look around the top of the room to find some of her adorable mice friends peering down at you. After that you’ll be called to go upstairs to the dining room. They give you a ticket and you proceed upstairs and hand it off to the next castmember who will seat you. We were thrilled to get a spot by the window, it was picturesque with a gorgeous view of…electric cords and construction. But it was still nice to be there. 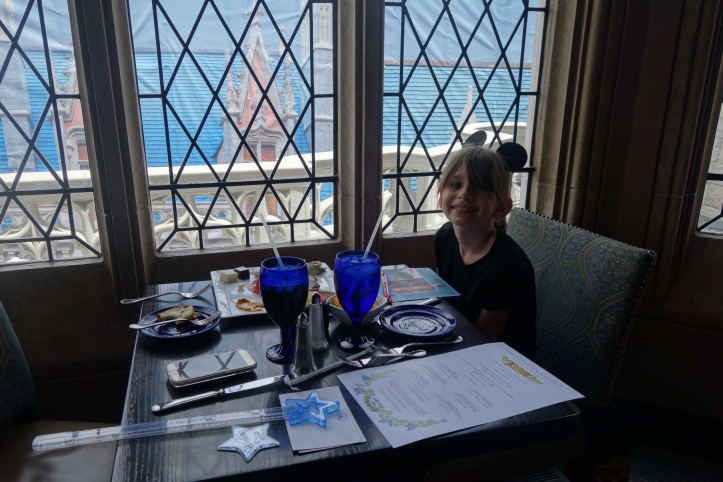 The server will present you with a gift, a wand for the ladies and sword for the gentlemen-no matter what age. Our server asked if she had brothers and brought two swords for the boys we left home. Everyone gets a “wishing star” trinket.

The universal appetizer came out quickly. My daughter is 10 so she’s an adult according to Disney, but our wonderful server brought out the kids app as well. 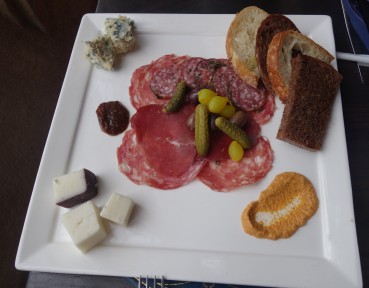 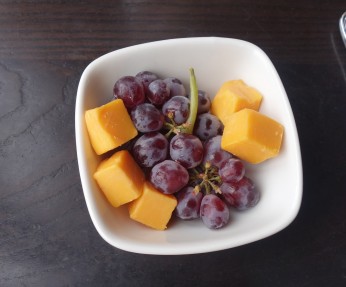 The menu is pre-fixe, so everyone gets an appetizer, entree and dessert. Plus a non alchoholic beverage. Since she’s a kid but charged as an adult she can order off the kids menu and get an adult sized portion of more kid friendly fare. So she did. I opted for the beef and shrimp. The beef was very tender and the shrimp-all 3 of them-were fresh. The mac and cheese was creamy and delicious, but she couldn’t finish it. They were nice enough to put them in a to go cup to take back to the hotel. 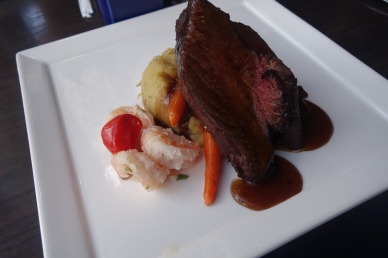 For dessert we both ordered off the adult menu, the carrot cake and chocolate mousse. They were both good, but the cake was a bit dry. The mousse was the best I’ve had at WDW- it wasn’t too thick and was very chocolaty. It was not the hard mousse items you find through out WDW buffets. 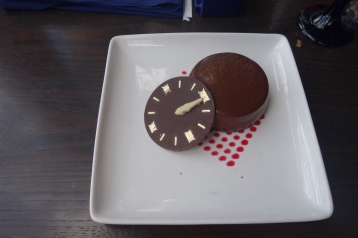 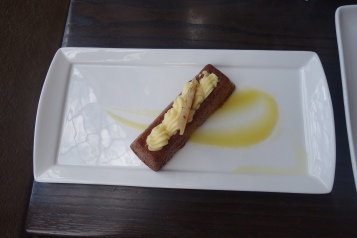 The princesses vary occasionally, but we met Snow White, Ariel, Jasmine and Auroroa. Each spends a few minutes at your table and poses for photos. We had some postcards with us to send  to cousins in Ohio who hadn’t been there for a long time. Each princess was happy to sign them and send their wishes.

To me, this is a once in a lifetime meal. It’s worth it once but it’s not a repeat for me. I would stick with Akerhus if I wanted to have a character meal with princesses more then once and save a bit of $$.